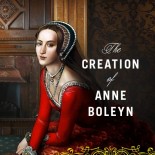 for The Creation of Anne Boleyn

The inspiration of an extraordinary afterlife in biography, fiction, and cinema, Henry VIII’s second consort undergoes a discerning cultural inspection. A university professor, though not a historian, Bordo daringly intrudes on the turf of such popular authors as Alison Weir, David Starkey, and Philippa Gregory, all of whom have written about Anne Boleyn. Connecting speculative passages in their works to biases in contemporary sources, Bordo depicts Anne’s allure to preface the main subject of this work, her image after death. Polemicists of the Reformation invented a satanic Anne for Catholics and a martyred Anne for Protestants. Novelists later created a character whom writers revive repeatedly—Anne as a disturber of conventional female roles. That the real Anne, whose involvement in religious politics probably precipitated her downfall, indubitably was. Bordo flourishes in this discussion, especially in her analyses of actresses (most recently, Natalie Dormer’s “smoldering, brainy Anne” in the 2007 television series The Tudors) who have played Anne on screen. Whether Anne is regarded as a temptress or a feminist precursor, her imaginative force in popular entertainment is one that Bordo perceptively illuminates. — Gilbert Taylor

This entry was posted on September 6, 2013 by thecreationofanneboleyn in Excited By!.

The Creation of Anne Boleyn RSS